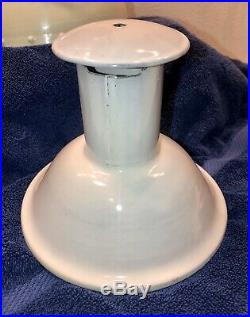 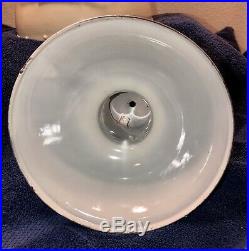 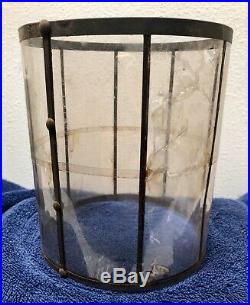 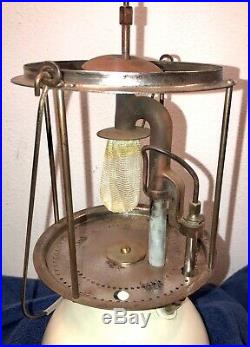 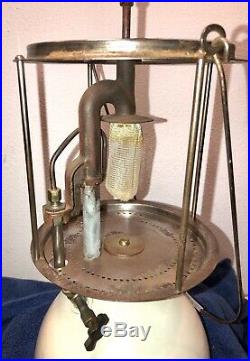 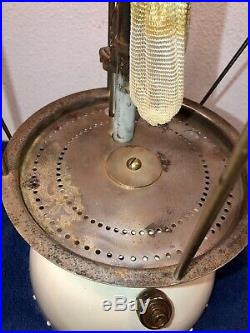 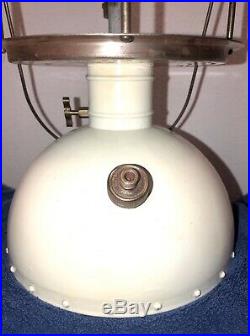 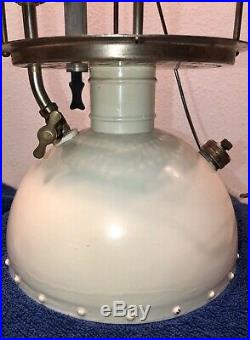 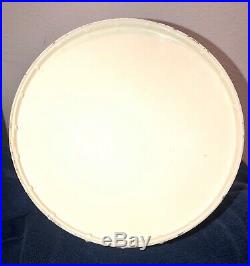 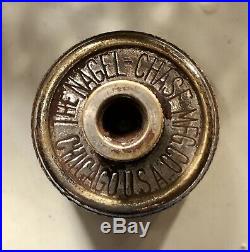 Offered for sale is a one-of-a-kind lantern for the discerning collector. Made by the Nagel-Chase Mfg Co. Of Chicago, IL, it has been identified as a Model 5. I have seen a few others, but none in this exceptional condition. I would guess around 20-30 are known to exist although I don’t know if they all have the same burner configuration. If you were at the International Coleman Collector’s Club convention in Bozeman, MT in June 2019, it was on display there. I wish I knew the background of the lantern however, it came to me once removed from the daughter of the collector who had it for a number of years. Her father had passed away some years before and she had stored a few of the lanterns that he had collected. I bought about 10 lanterns that were wrapped in 25 year old musty newspaper. Beyond that, I don’t have any history to pass along. This is a large lantern, standing 19 inches tall. The white porcelain stove pipe ventilator is 5. The diameter of the fount is 7.5 inches. The fount is riveted at the bottom rim and the frame support is painted h ard wood. I believe all the paint to be original. The ventilator porcelain and the mica chimney are also thought to be original to the lantern. It is rated at 300 candlepower with a single mantle. I have not done anything with this other than wipe it clean. The fuel cap gasket is hard and I don’t think that it seals well. The inside of the fount is hard to see, but there is a light surface rust, which is also present on some of the burner frame. The burner itself has a red-ish coating which I believe indicates that it was heated at one time and that the lantern was lit. The valve turns and the black wooden paddle to control the generator pricker turns and moves up and down slightly, however I don’t know how much it is supposed to move to actuate the pricker. The mica chimney is in nice condition, but there is one panel that is flaking. I have been very careful in removing it and slip a sheet of paper next to it first so that the loose edges don’t catch on the frame top rim as it slides in and out. The base plate of the frame is stamped PAT. Indicating a patent date of June 18, 1912. So few of these have ever changed hands (and none in this condition) that it is hard to put a value on it. It probably belongs in a museum, or the special collection of an established collector. The item “Nagel-Chase Model 5 Single Mantle Gas Pressure Lantern 1914-15 Rare and Old” is in sale since Saturday, December 21, 2019. This item is in the category “Sporting Goods\Outdoor Sports\Camping & Hiking\Flashlights, Lanterns & Lights\Lanterns”. The seller is “bazooka28″ and is located in Portland, Oregon. This item can be shipped worldwide.